I’d almost forgotten what it was like sleeping on Ward 27B; wandering the around the ward in your pyjamas meeting other parents, broken sleep due to the beeping of medication pumps and nurses who swear they are night ninjas but are not. The nurses started hydrating Rory with fluids last night. This meant he had to get up three times in the night to pee. It all has to be captured in plastic bottles, no mean feat in the dark.

Dr Stephen came in this morning. The PET-CT showed no evidence of cancer elsewhere in Rory’s body which was great news. A small area (9mm) was lit up in the left lymph node under his chin but no mass can be felt. It is not considered to be significant at this point in time and does not change the treatment regime. Rory will be treated according to the protocol for osteosarcoma. Initially this involves two cycles of MAP chemotherapy prior to any surgery.   He will get three drugs; Cisplatin, Doxorubicin and Methotrexate. The two cycles will take around 10 weeks, longer if he gets any infections or his blood counts are too low. He will also receive Dexrazoxane to protect his heart and anti-nausea medication. Rory’s treatment is complicated by the fact he received Cisplatin 10 years ago. It was responsible for the loss of his high frequency hearing and implicated in further declines. There is uncertainty around whether the new doses of Cisplatin will affect his ears and the functioning of his cochlear implants. Dr Stephen said Rory’s back is up against a wall and his best chance of survival is the osteosarcoma protocol, especially because Chondroblastic osteosarcoma does not respond as well to chemo therapy. If we substitute Cisplatin for an alternative or give him additional drugs to lessen any potential impact we risk affecting the efficiency of the chemo. We have to accept the uncertainty around his future hearing.

A sample of Rory’s tumor and blood will be sent to Australia for genetic testing to see if Rory has the gene which predisposes him to cancer. It will take six weeks to get the results. If there is a positive result we will get genetic counselling as a family and have to make decisions as to what to do next. It may also affect the treatment Rory receives.

The Dietician has been in. Rory has already lost weight. If he gets to 10% weight loss they will need to put a naso-gastric tube in to ensure he gets adequate nutrition. There is a list of foods he is no longer allowed and a list of high energy foods we should encourage him to eat.

Over the last week there has been a continuous flow of complex and important information in our direction. Even though we have hit the ground running because we have been here before it is still a lot to digest and understand. 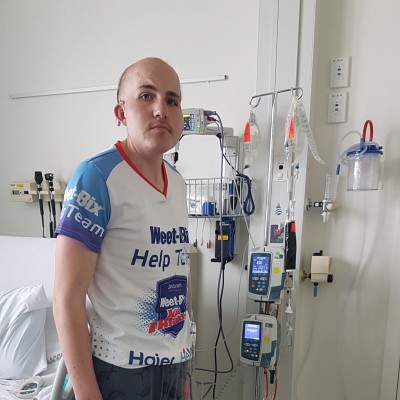